Ganh Son is actually the northern segment of Tien Thanh Beach, just outdide the city of Phan Thiet.
This beach is normally not on official tours; probably because it was difficult to reach until recently. However, a new road along the beach has now made this accessible, and it now appears on some lists of attractions for the province. There are a number of incredible and very famous photos taken at this site. What were once small drainage ditches, in a few decades, have become enormous canyons winding through cliffs of red, golden and silver sands. The scenery is truly spectacular. You could spend a lovely afternoon here--or ruin your entire trip! This beach is extremely dangerous and is best avoided by tourists. The base of the canyons are covered in deadly quicksand. Locals tell stories of many people entering the canyons and never coming out. We do not recommend exploring them under any circumstances, and guides from anywhere but the village located here on the beach should not be considered reliable.

There is however an even deadlier hazard. The area above the beach was once the site of the American (and once the French) military base and air field "LZ Betty" (see links section under war era for more). Battles were fought here, and upon evacuation, the American military is known to have burried large numbers of unexploded ordenances-mine, bombs, grenades, etc at the site. The canyons have expanded quickly over time, and have likely swallowed up many of the ordenances and could potentially spill them out onto the beach. Ganh Son is a very unstable location.

There is one safe vantage point to view the canyons. The road from Phan Thiet to Khe Ga runs through a safe section of the abandoned airfield, and from the highway you can stand at the rim of the canyon and get a great view. You've got to wonder though--how long can the highway last as the canyon continues to inch its way closer to swallowing it up?... A similar though smaller landscape may be viewed at the Red Sand Canyon on Hon Rom Beach. 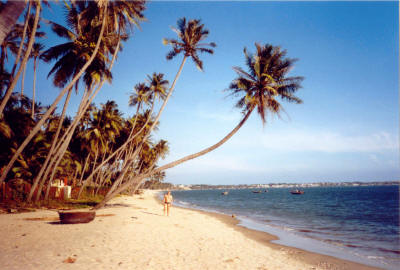